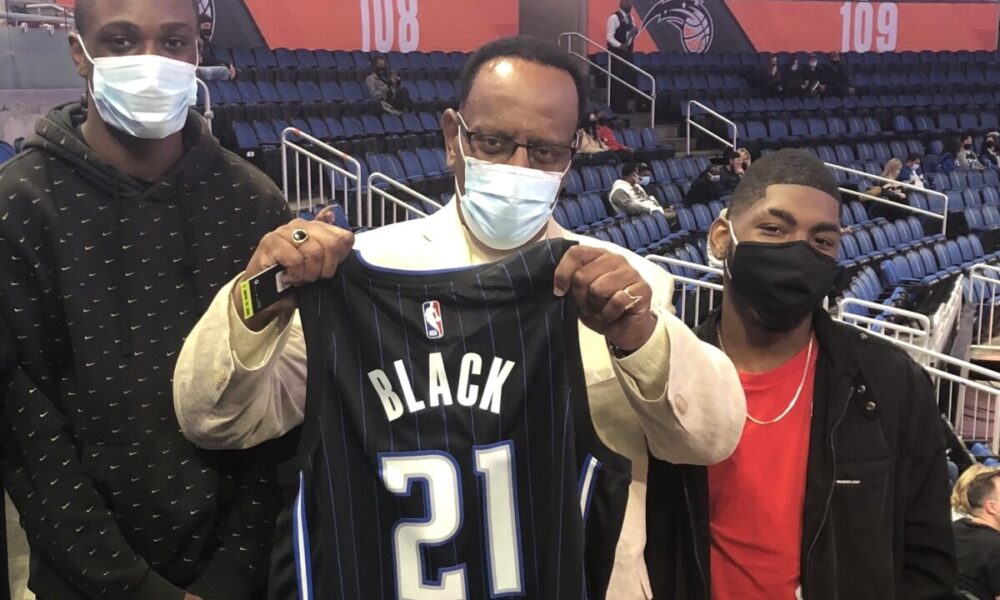 Through his devotion to community service, his role as president of the Lake Sunset/Luola Terrace Neighborhood Association and his work as the publisher and editor- in-chief of ONYX Magazine, a nearly 24-year old publication that celebrates Black achievement throughout Florida, he has made an enormous impact on many lives.

A graduate of Bethune-Cookman University, whose parents are originally from the Bahamas and were the first to operate a Black-owned restaurant in downtown Orlando, Black has worked with many organizations, including the Orlando Magic, to change the status quo as it relates to health, education and socioeconomics.

He has earned several accolades for his community achievements. In 2018, for example, the National Congress of Black Women (NCBW), Orlando Chapter, honored him with the Dick Gregory Good Brother Award for his outstanding commitment to the community.

“I guess I developed a lot of my attributes from watching him (my father) working in the community with some of the leaders from back in the day,” he said. “I have had a passion for African-American males. I have three sons. I just felt that with (Barack) Obama and even before that working with my cousin Congresswoman Frederica Wilson with the 5000 Role Models down in Miami. We just saw the need…And also working with the Magic of Mentoring (program). I always liked the Orlando Magic, but I fell in love with the Orlando Magic when I found out they had the Magic of Mentoring.”

ON THE HORIZON: Encouraging African Americans to get the COVID-19 vaccine is something Black is heavily focused on at the moment. Dispelling any rumors or concerns others have about getting the injection and educating them on how it will help speed up our nation’s recovery is critical to Black, who plans to work with others to help share important information about the vaccines available.

Helping Black-owned small businesses is also key to him. The way Black sees it, having conversations about wealth is a must to change the narrative. Providing small business owners with proper mentoring and training, he says, can reverse financial hardships.

“Until we begin to educate, until we begin to give these people not a handout, but a hand up, we will always have these problems,” he said. “I applaud the Orlando Magic on what they are doing now as to dealing with the social equity piece and things of that nature because they are in the heart of our community.”

BEING HONORED: Flattered the Magic thought of him, Black is extremely impressed by the team’s allegiance to helping others reach their full potential. The organization’s energy, compassion and dedication is a big reason, he says, we are seeing exponential growth and development in our local communities.

“This speaks to their commitment,” he said. “They’re not just talking. They’re actually doing the work. This says to me that all over throughout the country with the NBA almost 80 or 90% of the folks on the team are African Americans, I really applaud them and I am really honored and humbled.”

ABOUT THE PROGRAM: As part of the Magic and Steve Clifford’s continuing efforts toward social justice reform, he created the Social Justice Game Changer program to honor one local leader who has made a difference in the realm of social justice issues. A cause close to his heart, Clifford is extremely active in programs that support equality and justice for all people in the Central Florida community. Through this program, Clifford looks to put the spotlight on those continuously doing the hard work, day in and day out, fighting for sustainable change. As part of his program, one person is selected and honored each game. The honorees are given tickets, provided by Clifford, to the game and featured in-arena on the Magic Vision screen at center court.

“The purpose is to honor and to celebrate so many of the people in the Orlando community who are fighting for change and who commit their lives to making Orlando a better place,” Clifford said. “It’s just a way to celebrate them, what they stand for, and what they do for our community.”

By Evan Sidery The Indiana Pacers are finally embracing a rebuild. After years of toiling around in mediocrity, the Pacers realized their slow start and ...